We think that the history of a school is important, not only to those of us looking to our 10, 20, or 50 year reunion, but to our families and friends. Part of the Foundation’s mission is to help connect people back home. Even in our research, it should be noted that giving back to the school was a fact of life in these parts; even the class of 1908 donated a beautiful $200 Cantoria Frieze to put in the school’s assembly hall (according to the 1912 high school annual). 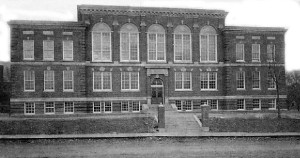 The history of the Fergus Falls School District goes back to the earliest days of the town itself. The first classes, in what was then District 21, met in the summer of 1871, the year before Fergus Falls officially became a village. In 1871, the Baptists had formed the city’s first church but had no building, the postmaster couldn’t read English, and Fergus Falls’ weekly newspaper was printing partially in Norse.

It was an inauspicious start for the school district. The first classes were in a horse barn on the bank of the Otter Tail River near Central Dam, and neither the flies nor the odor were helpful to the education process. A month after classes began for the 21 students, the teacher (who was being paid $38 a month) eloped with a stage driver! It was December before a new term could begin – this time in a small building near the corner of Lincoln and Union.

Growing enrollment – it was up to 160 students by 1876 – required the district to move and expand several times. In 1883, Washington High School was built at the corner of Union and Cavour, and the district’s first seven graduates received their diplomas in 1884. Both the valedictorian and salutatorian gave speeches on the classics, with the salutatorian speaking in Latin!

About this same time, Adams School – the city’s first elementary school – was built and Jefferson School was completed shortly after. (Both were replaced in 1939.) In December 1887, only four years after the new high school was built, it burned to the ground after a fire began in the basement heating plant. With the temperature at minus 26 degrees, the firefighters’ water froze the instant it touched the building’s walls. The fire broke out during Christmas vacation and caused a financial hardship for many families. Students, at the time, had to purchase their own books, as they’d been advised to leave their books at the school for safekeeping over the holidays.

A new Washington High School was erected, using a portion of the former one in its construction. The new building had three stories, on the first floor were several lower grades, on the second the high school, and on the third floor the eighth grade. It was known as one of the best high schools in this part of the state at the time!

Things Were Looking Up 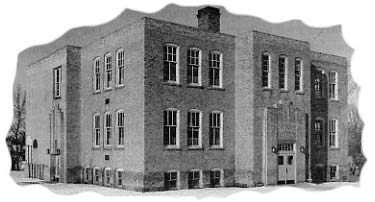 By the mid-1890s, things were going well for the district. Chemistry and vocal music had been added to the curriculum, and the school board had voted to open the high school library to the public. There were bumps on the road to education though. The minutes of an 1894 school board meeting state that members agreed to refund $1.50 to each of the two Norwegians who paid $4.50 apiece for the winter quarter. They quit, the minutes relate, because they could not understand the English language.

In 1904, Adams School was closed because of smallpox, and Lincoln School was completed. That was also the year that Washington School burned for the second time, with an estimated loss of $35,000, including $4,000 worth of text books. The next high school was erected shortly thereafter.

The Adams, Jefferson and McKinley schools were completed in 1939, and additions to the buildings were first occupied in 1957. That same year, Eisenhower and Cleveland schools were built and a full-year kindergarten was established. Also in 1957, the name of the district was changed from District 21 to District 544.

As student numbers continued to increase, Roosevelt Park Senior High School (also known as Fergus Falls High School) was completed in 1953. The “junior college wing” was added to the high school in 1961, and a vocational wing was opened in January 1967. Then, over a two-day period in late May of 1967, Washington School was again destroyed by fire. While a new junior high was being built on a site north of the senior high, students from the senior and junior high attended classes in shifts at the high school. Students in grades 10-12 went to school from 7 a.m. until 12:20 p.m., and those in grades 7-9 had classes from 12:30-5:45 p.m. Junior college classes were moved to Fergus Falls State Hospital and eventually to a new college campus on the northwest edge of town. The new junior high was completed in the fall of 1969.

The following years brought endings and beginnings. The rural schools were closed, along with the Madison, Lincoln, and Jefferson schools. (Madison and Lincoln were eventually torn down and Jefferson became the headquarters for the Lake County Service Cooperative.) Eisenhower closed, reopened as a kindergarten center, switched to an early childhood center, and then served 6th grade students for 2 years while the middle school was being remodeled from 2008-2010. In 1982, the junior high school became a middle school, with grades 5-8, and in 2010, it became Kennedy Secondary School, with grades 6-12. In 2007, the elementary schools (Adams, Cleveland, and McKinley) were reconfigured. All early childhood education and kindergarten were at McKinley; Adams had grades 1 and 2; Cleveland had grades 3 and 4, and 5th grade was moved over after the new addition was completed in 2008. In 2003, a partnership between the Prairie Wetlands Learning Center and the school district was formed “to engage students in science, math, and writing through real world, field based learning experiences.” The program was first offered to 5th graders, with the 4th grade program being added in 2008. The administrative offices moved out of the middle school and into a building on the campus of the Fergus Falls Regional Treatment Center, only to be moved again in 2006 to the “old Pamida building” on the south end of town, and then to its final spot in the Kennedy Secondary Building in 2010. Fergus Falls High School, as most of us remember it, is used for vocational classes, the Area Learning Center, the Special Education offices/935 Cooperative, 544 Education Foundation, and Community Education.